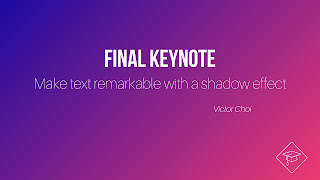 Design in presentation is not a decoration. Design is taking care of your audience. One message in a slide has been frequently told in many presentation books or trainings. So how can we make the sentence which tell the message remarkable? Because the text should be impressive to the audience.

See the sample of the shadow effects.

An engraved text effect in Keynote is a little hard to create. Because Keynoe doesn’t have a function to add an inner shadow effect in a text object.

Through this tutorial we are going to make a difference a border color and a fill color of text with Keynote’s shadow effect.

Keynote7 , give me a function to convert from text to shape object

Keynote is a vector based graphic tool. By the way, it’s not fully functional if we compare Keynote with Sketch or illustrator. But, the reason that Keynote is very powreful is that Keynote is really easy to use.

Therefore normal users who are not related to graphic fields can easily learn and use Keynote to design something. So I hope that Apple add a new Keynote feature which we can convert from a text object to a shape object.