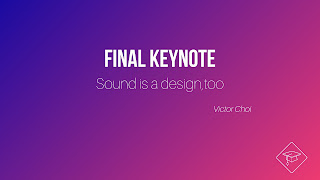 When he firstly showed the price, he used a sound effect breaking a glass with visual animation on the slide. And the direction of the show was so dramatic and made it sense to the audience. I think that the sound engraved the moment on the brain of audience.

Through this tutorial we will learn how to use a sound effect in Keynote and then we will make a dramatic effect with a sample sound that I provide for you.

As a result, you will get the idea that we don’t have to limit our design with jus visual graphics. A sound is invisible. But, sometimes it is more effective than a visible thing.

Watch the trailer of this tutorial below

How should we use a sound clip on presentation design?

Using a sound clip on your presentation shouldn’t be frequent. Too many sound effects could be bad to the audience’s attention.

Always be careful to use a sound clip with animations or transitions in Keynote.

The sound clip should have a right meaning of your scene.

Think about Steve Jobs. His message was ‘The expectation of the price is broken.’ So the message , the animations and the sound clip shared a consistent theme to direct the scene.

Keynote can control your sound clip with animations.